Pants on the Ground

by Jake Garn | May 16, 2011 | Featured, Stories from the Shoots, Whimsical Fashion Photography | 7 comments

Years ago Katherine and I used to shoot in downtown Salt Lake City almost weekly and last week we decided to take a nostalgic trip down memory lane and do it again.  All natural light, just me, my camera and Katherine.

I usually don’t shoot on-location in Salt Lake City anymore, just too many people around… This time we went almost 6 full minutes without some guy yelling something moronic out the window of his truck.  Three dudes, the guy in the back seat yells, “Nice ass!” as they drive by.

Sure, I was flattered, especially since I don’t even work out, but seriously, why is it that the majority of such shout-outs come from a group of dudes in a pickup truck with big tires?

An hour or so later we found this business down an isolated street and I just loved the peeling paint over metal and asked Katherine to stand in front, then I asked her to pull her pants down.

“Because it’s going to make a sweet picture,” I responded.

Which was true, a delivery driver pulled up and was starting to unload his truck right around the corner… he couldn’t see us and even if he could it’s not like Katherine was exposing anything, she still had a dress on that could easily be worn without pants altogether… but Katherine is a girl, and she has experienced enough of the shout-outs from guys in big trucks to be suspicious of all guys she doesn’t know… and all I wanted to do was to make a cool picture.

The moral of this story?  Not really sure, but I’m pretty sure it has something to do with a reminder that if you happen to be one of the people yelling stuff at girls as you drive by you should know something, nobody is impressed. 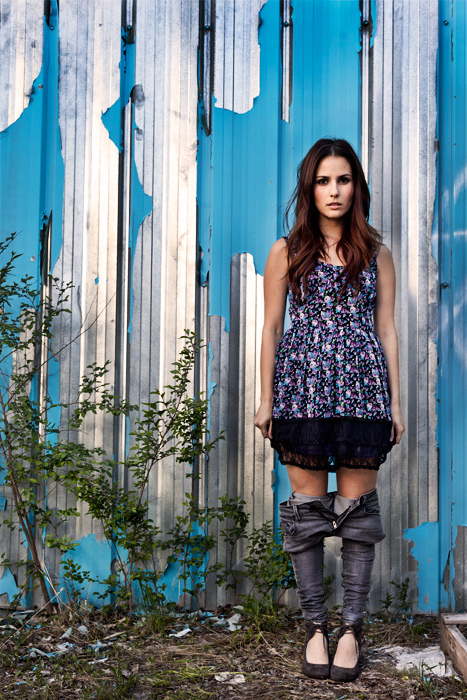