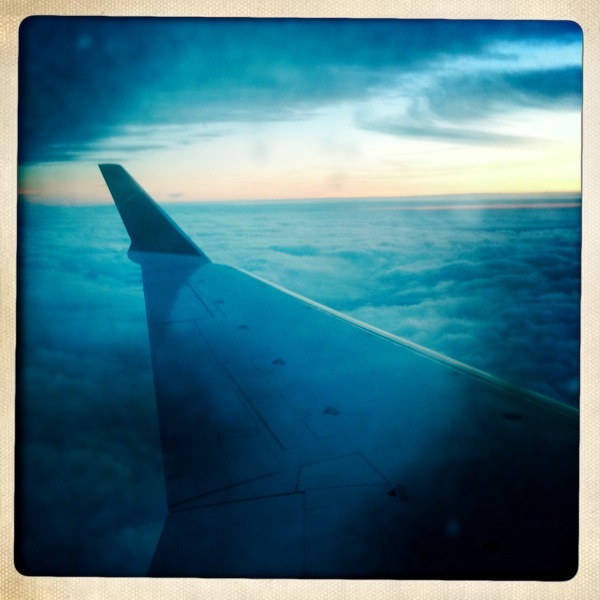 Steven Wood and I landed at 6:04PM, drove straight from the Portland Airport to Stereoblind studio where we met our two hosts along with two models and two stylists.  This would be the first day of a three day shooting trip, seven models in three days.

The first day, right off the plane, was a shoot planned with a full styling team and three models.  None of whom I’d ever met in real life.

This trip was a bit of an experiment.  I wanted to see how hard it was to leave my geographic comfort zone and shoot, was it worth the hassle to bring a camera on short trips?  Away from my lights, away from my studio, away from my connections.  On a bit of a whim I was browsing Modelmayhem and spotted a model or two that I thought I would LOVE to shoot, and both were in the same city..Portland, a city less than an hour and a half away by plane.   One thing led to another and I looked up prices which seemed much to inexpensive to be right, Steven agreed to join me.  We’d do some shooting, check out the sites and maybe even test drive a Ferrari with a blind Al Pacino, who knows.  I was ready for anything.

About 45 minutes before getting on the plane, a few hours before the shoot, I received an email from one of the models.  “Family emergency, can’t make it.  Sorry for the late notice…,” that sort of thing.

These happen, the longer I’ve been a photographer the more rarely they occur… leading me to believe that when they do occur it’s probably legitimate.  I emailed her back thanking her for letting me know and… well, didn’t know what we’d do.  No cell service in the plane, which was leaving soon.

We formulated a plan B at the shoot.  Instead of one look each for three models we’d do two looks of two models.  The results were… well… if I were into sports analogies I’d say it was a home run. 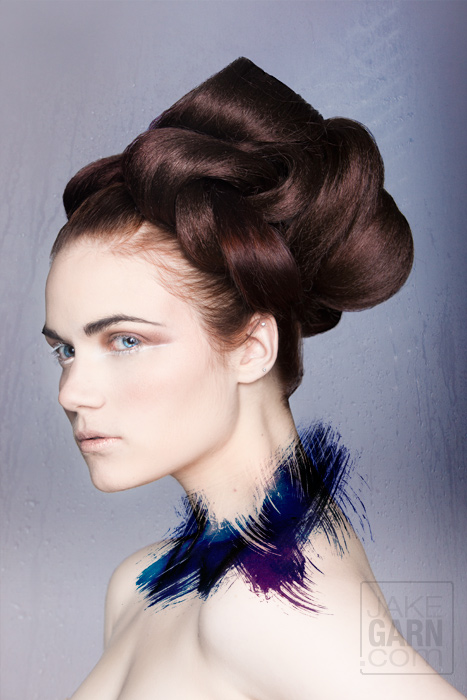 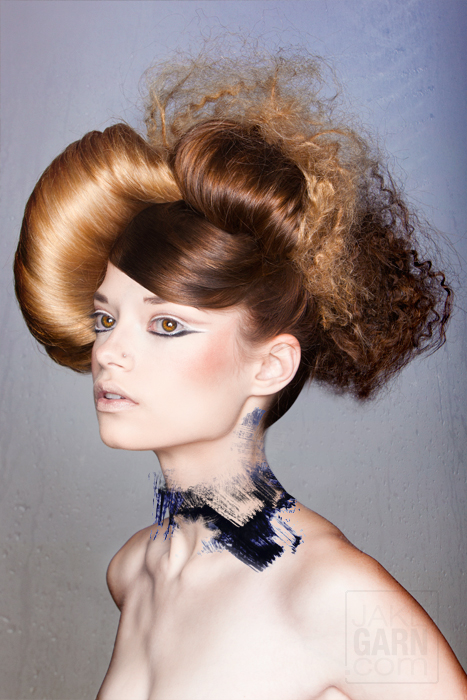 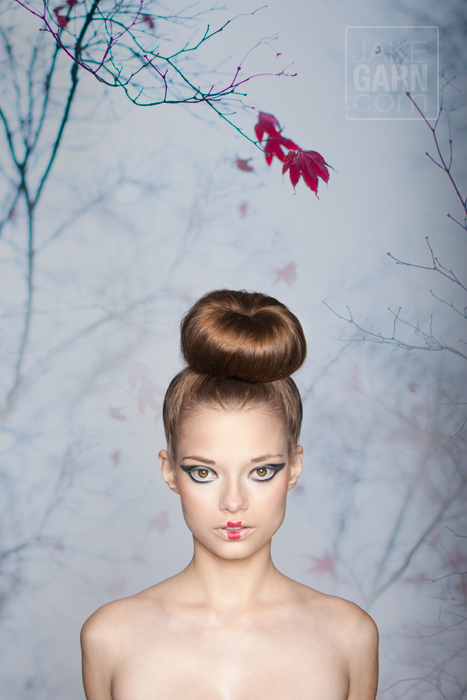 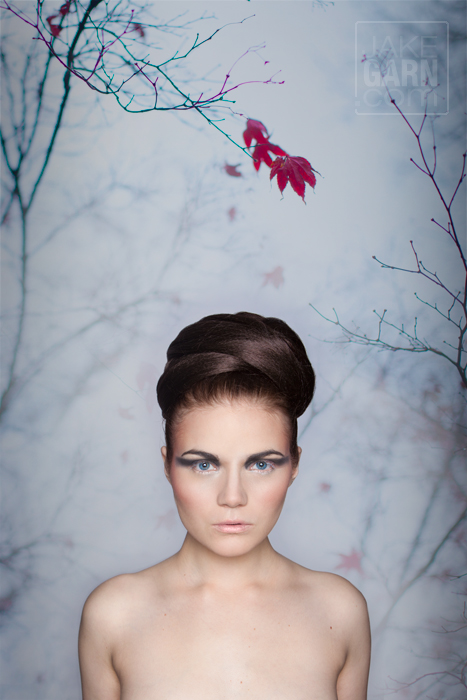 The lighting setup I used to achieve these is simple.  A single strobe with a parabolic umbrella (86″) creates a very soft even lighting. The umbrella is directly behind me with the face of it perpendicular to the ground, if you look closely into the catch lights you’d see me standing in front of the light.  To bring back some definition in the edges I placed two large, black foam boards on either side of the model, just barely out of frame.  That is what gives that distinctive shaded contouring around the edges of the model, so to speak.

As seen in this simple lighting diagram. 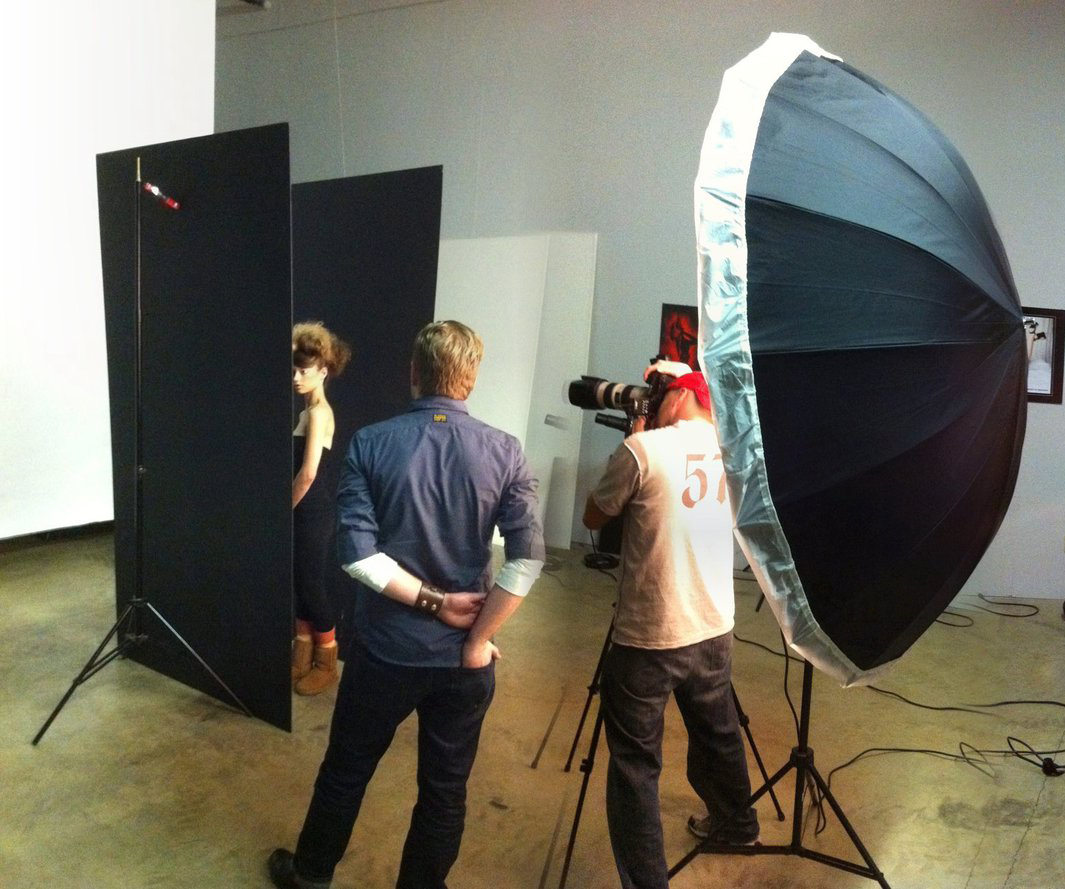 Setup photo courtesy of Dan LaHaie and his iPhone

Lighting doesn’t need to be complicated, but it does need a lot of attention to detail.  As anyone on set that day can probably attest to – angles, distances, power and reflectors are tweaked and tweaked and tweaked… until… well, you just know it’s right.

Complete Equipment Used for this test